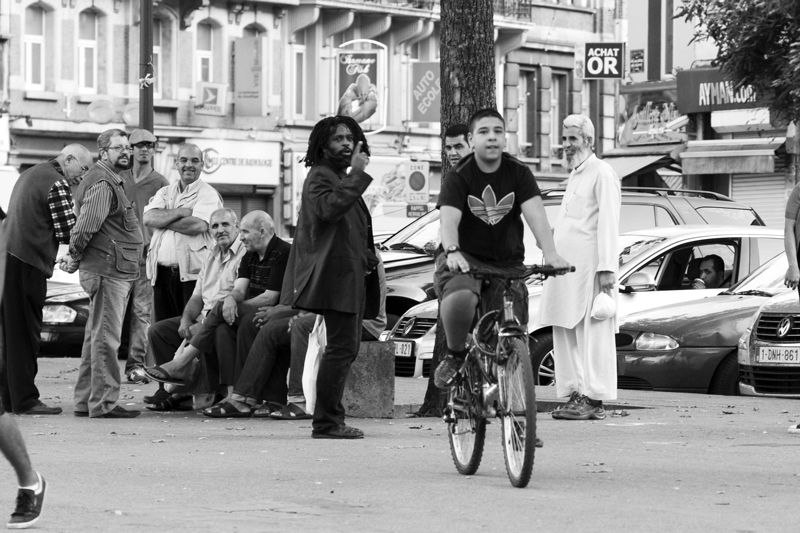 As I walk along the Seine in Paris, I fantasize how it would be for an average Medieval man to be transported to this time with a time machine and to walk here next to me on this sun-drenched day in Paris.

What would he feel, what would he think? He would certainly notice how many cheerful people there are; most people I pass by smile or nod friendlily to me. Other people sit totally relaxed on a chair and are massaged. On the sign next to the masseur you can decide for yourself what you want to pay for it. There is a beach recreated and as an alternative to a dive in the still too dirty Seine there are showers for cooling. At the Louvre, people eating ice-cream, beautiful sun-tanned bodies in sun loungers and feet in the water of the fountains. People read, laugh, talk, maintain each other. The Medieval man will almost have to think that he ended up in paradise. Or not?

As I continue along the Seine I come across the first group of tramps under a bridge. And when I leave the Seine, towards Gare du Nord and Marais, I meet a lot of people living on the streets. At night on the way home the tears jump in my eyes. In every port that is deep enough to accommodate a human body, families are sleeping: mother left, children in between, father on the right, grandmother or grandfather somewhere in a corner. Contrasts are inherent in a city, but how bearable are such extremes, so close to each other?
If you start paying attention as an outsider, you will see them everywhere; not only the difference between super rich and poor, but also the differences in atmosphere per neighborhood. There are the bustling neighborhoods with young immigrants where you can buy imitation copies of expensive designer clothes in Chinese boutiques. On the other side the Paris that has stood still for years. The Paris that has become an open-air museum of hundreds of years old, with the classic Parisians, the so-called bobo’s; women with perfectly curled hair, with matching handbag and dress, men in expensive cars and tight suits.

On the market at Porte de Clignancourt it becomes clear how different groups live close together, without interfering with each other.

On one side of the market you will find the gossiped North African boys who walk with you to sell sunglasses and watches. But they stop until you cross the line and end up in the old-fashioned brocante section, the other side of the market. There you will find those typical old French males and females; it is a great beautiful still life that you end up in.
In this still life, the spectators who had registered in advance through the Paris theater festival would not notice Agoraphobia. They are predominantly white, female and old. However, the people who walk around and hang on the places where they play and become casual spectators of Agoraphobia, are much more mixed. Gare du Nord, the Republique, Fontaine des Innocents and Pantin Rue Hoche are squares where you will find a great diversity of people. It is customary that Agoraphobia never plays in the same place: “If you play in the same place several times, then you suddenly see that place as the theater and you start directing, securing things”, says director Lotte van den Berg. To avoid that, every time a different square is played.
Every day that is played there is the same kind of ritual.

It goes like this: a few hours before the start of Agoraphobia, production leader Antwan Cornelissen drives the car as close to the square as possible. There is unloading: sound equipment, a box, a suitcase, newspapers, a couple of crates of glasses and lemonade. The preparation does not resemble the usual theater process. Here is not just the run-through, the decor set up or just something eaten. The preparation of Agoraphobia means: to think on the spot how the actor will broadly move across the square, talk with police officers present, talk to demonstrators and solve other unexpected factors. Even just before it starts, the usual theater routine is excluded. There will not be a stage manager announcing that the audience will arrive in five minutes: the play simply starts, without the light going out and it ends when the actor disappears from view. It adapts to the rhythm of the city.

The actor who plays in Paris is called Soeuf Elbadawi. He comes from the Comoros, an African archipelago that was once colonized by France. He wears a sloppy black suit with pinstripes and drags a suitcase with him. In the Parisian landscape there is no doubt about his identity: he belongs to the street. During the performance, Soeuf addresses occasional passers-by, speaks to them, starts a discussion, shakes hands and walks on. This creates beautiful scenes and moving encounters. At Fontaine des Innocents, his journey gets something magical because he gets a real crowd behind him.

I immediately notice something about the audience in Paris: there are always spectators who explain to passersby that Soeuf is not a real wanderer, but an actor and that it is a theater performance.

Not that the passers-by ask, it seems that the spectators themselves need it. The applause afterwards is also striking in Paris. The performance ends with the actor who disappears in the city between the people. Only after a quarter of an hour he returns, when most of the spectators are busy talking to each other and are drinking something at the improvised bar on the square. In Munich I realized that the return of the actor was not even noticed by many spectators, but in Paris Soeuf can count on convincing applause every time. Does emphasizing the theater construction make it legitimate to look at a wanderer? Does the tramp make a difference in the street than all those thousands of real tramps? Or does the theatrical framework enable them to better understand reality?

The last night I have diner at Soeuf’s home in Paris. His voice was almost gone at the end of the performance, but is already coming back. One thing struck Soeuf about playing this piece: “It seemed like people were paying more attention to the moments when I felt like it slipped out of my hands, that I lost my concentration and that I had no control at all. Over the city and what I said.”

An actor who experiences that his audience listens most attentively at the moments when his concentration drops and he loses control and an audience that seizes every opportunity to maintain the theater construction.

Does it have anything to do with the other? The moments of loss of control were probably the most true because they were on the border between theater and reality. The theater forms a delineated viewing frame, but if you take that frame away, what do you look at, what do you see? The moment the actor loses himself and is no longer an actor; what is left? Then you see a wandering, searching man in a city with countless contrasts. Really looking at a city, says the French writer Georges Perec, so do not think in ready-made terms or what planners and sociologists have said, can have something frightening. Perec: “You have the feeling that you can only cling to tragic or despairing images, (…) that you can only continue endlessly with questions that are not answered.”
In that light it is not surprising that the public was so eager in the renaming of the theater construction. It created a framework and offered a hold. Yet there is something to be said for occasionally letting go of the theater and seeing reality in all its ambiguity and contrasts. If only to try to find answers to the questions that Agoraphobia asks us over and over again. Who are we together? And who am I alone?