The performance “Dying Together”

A young woman in a grey sweater rolls over the floor, bumping into other people. But when everyone stands together for the last half hour to portray the body of a deceased man, with full conviction an entirely normal female visitor stomps the rhythm of a heartbeat on the floor. A project that achieves this, that encourages strangers to open up to each other, has pulled off quite a feat. 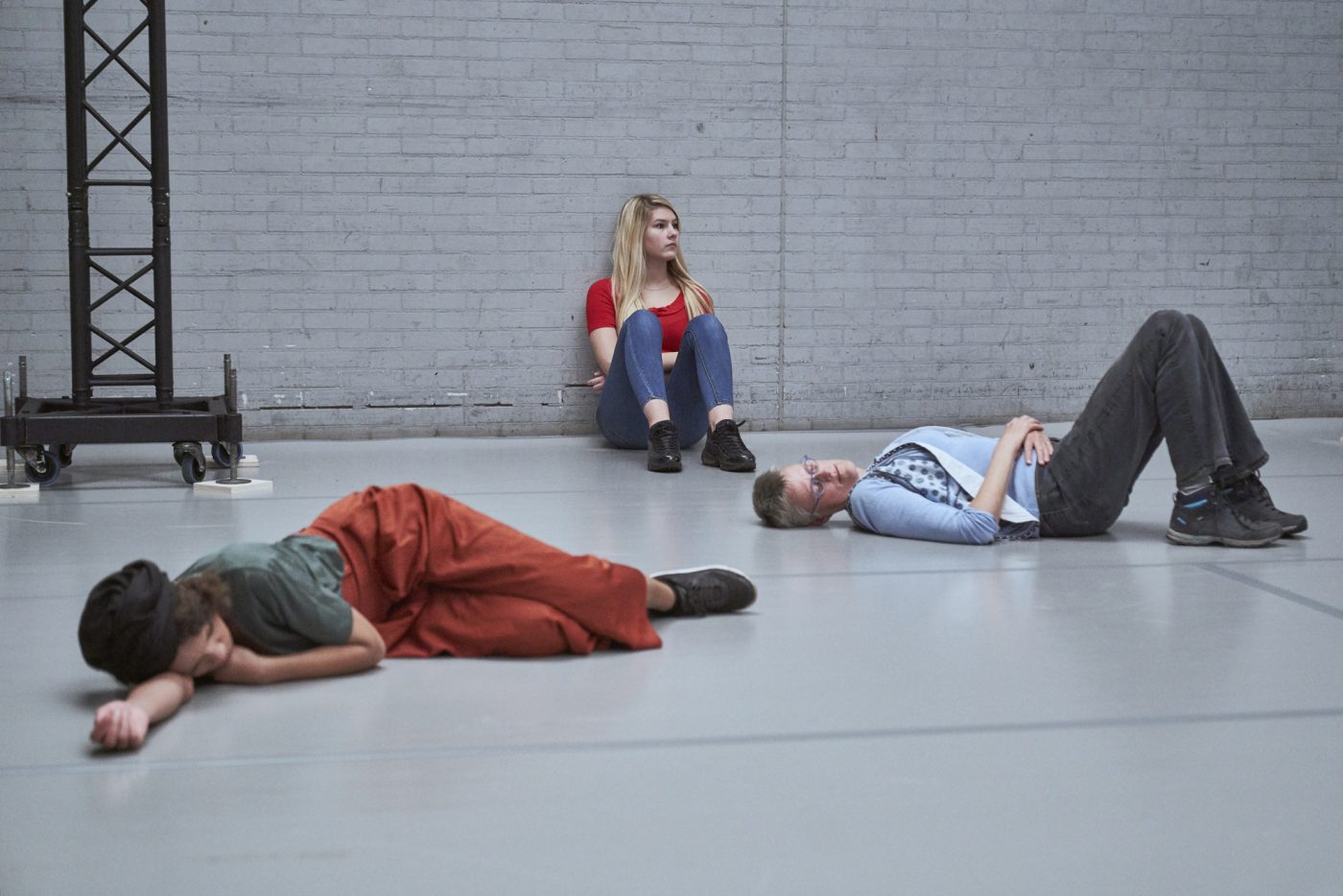 The performers and audience take a position in the space: this is a scene from the production “Dying Together” that was performed in Zeche 1 of the Schauspielhaus Bochum. Photo: Salih Kilic

Bochum – Lyrics from the Burt Bacharach song: “What the world needs now is love, sweet love.” We all need more love. Director Lotte van den Berg placed this at the heart of a theatre project.

More love, more compassion, that’s what she wants to attain with “Dying Together / Earth”. An unusual concept because the first three acts are about death: mad cow disease, land grab and deforestation in the Amazon and the 2009 suicide of a Japanese banker. But harrowing stories remain abstract until people find a way to integrate them into their emotional life.

An “Immersive performance” unfolds in “Zeche 1”, the small venue of Schauspielhaus Bochum. 81 people are in the space. Some of them belong to Van den Berg’s performance team, although it’s unclear who. For the introduction of the theme, the audience members are asked to find a quiet spot. Van den Berg asks everyone to separate, and they do: even couples remain apart throughout the two-hour performance. For those who want to exchange ideas, there is an opportunity for a discussion afterwards. “Dying Together” is a two-part production. “Dying Together” part 1 is entitled “Humans” and weaves together thoughts about the Germanwings crash and the terrorist attack on the Bataclan nightclub in Paris.

People who don’t enjoy actively participating in a theatre evening will initially be put off by the events. The performers give directions in a calm voice and the roles are divided. You might be approached by a young man who squats next to you and softly asks: would you like to imagine being a cow?

Those who agree are taken to a point in the space and asked to focus their thoughts in a specific direction. From this point on, everyone can move freely. And in the role that’s been assigned to them—as a cow infected with BSE or as a soybean plant that sprouts in the bulldozed earth of a rainforest and is immune to glyphosate. Or the intestinal cell of a decomposing male body. It’s also okay if you turn down the role and stay to watch or leave partway. The soybeans are grouped together. The young man playing a destructive bulldozer is blocked by another man. As soon as the situation changes—everyone is asked to imagine that the forest’s now been cleared—the demonstrator lies down quietly.

Van den Berg calls this type of social family formation ‘constellations’. Everyone is called upon to experience the presence of the other and to imagine how the relationship with the group feels. How does a dying intestinal cell feel?

That may sound quite amusing: from esotericism to dancing glands. Van den Berg does indeed use Theatre workshop techniques, by guiding the participants with gentle instructions in a certain direction and stimulating their imagination. As already noted, it won’t appeal to everyone, but the overall atmosphere is one of calmness, respect and openness. And during those two hours, only one person checks their mobile, which is remarkable.

The Van den Berg team performers fully inhabit their role. Everyone is asked to imagine that, 100 years after its destruction, nature in the Amazon reclaims its right to exist. A young woman in a grey sweater rolls over the floor, bumping into other people. But when everyone stands together for the last half hour to portray the body of a deceased man, with full conviction an entirely normal female visitor stomps the rhythm of a heartbeat on the floor. A project that achieves this, that encourages strangers to open up to each other, has pulled off quite a feat.