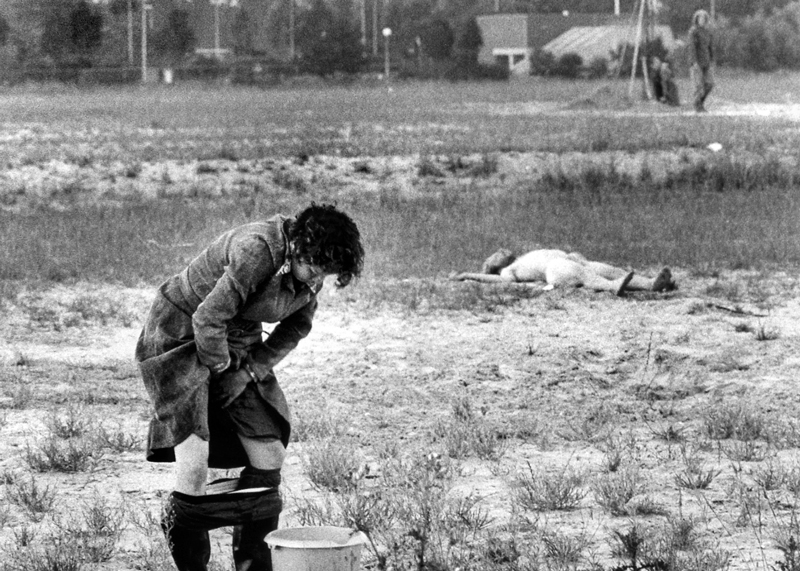 Theater performances by Lotte van den Berg seem to have fallen out of time. They are not actually a theater either. Well-placed words, dramaturgical developments and psychological truths are strange to her. You could better describe her performances as a ‘scenic fata morgana’, formed by atmosphere and looks, vibrations, smells, emotions, amazement and fright. This theater morgana is different from everything that exists in contemporary art between performance and drama. That is not to say: better or worse. But: different. Radically, totally, phenomenally different.

“I look at theater and in particular the creation process as a research assignment”, says the Dutch director, “and that starts with something that fascinates me or disrupts me. That can be a theme, a question, a person, a certain situation, which I respond to. Sometimes it is even a text. I then investigate this from my subjective perspective: how can you experiment with human behavior, how does a body react, how do social processes come about? I create an environment in which I can investigate together with the performers.”

From this self-assured, personal approach, the unusual intensity of the performances can probably also be explained. Braakland, for example, a site-specific work from the year 2004, shows what the title promises: a sandy piece of land on the outskirts of the city, with no place or time. Always, and forever, it seems. Just like the people who squat and wait on the ground, who roam without wish, without purpose. No word is spoken, nothing happens, but the air is charged by the slow rhythm, the noises from the environment (birds close by, cars further away), the distant view and the suspicion that life and death in this wasteland ceaselessly overflowing each other. A strange woman turns up, as if she had fallen from the horizon. Her bag is torn off, her stuff thrown over the ground. Then no one looks at her anymore. A man has a steel pipe in his hand and after some time, quietly and purposefully, almost ritually, begins to kill one after the other. Only the strange woman remains. She buries the others and then drills herself into a hole, like an animal.

This piece, perhaps Van den Bergs strongest, arose after reading novels from Coetzee and, partly due to the constant changes of perspective from total to close up, appears as a live film. The performance has been performed in many different places in different landscapes. Every time again it is a moon sick puzzle, deeply sombre and untouchable.

The blue hour (2003) looks like the unencumbered counterpart: this performance plays in the middle of the city and starts shortly before sunrise. Here everything refers to the concrete: the viewer sees a street when awakening. First the birds, then the inhabitants, slowly but surely it becomes lighter and louder, colors and sounds alternate, doors open and gulp on what stands for it, milk or human. It is a mixture of staging and coincidence, the atmosphere is cheerful and casual, the world is still here – all the misfortune can still be blown away, the kiss on a wound on the finger of a child. That it will not remain so is known. The show also knows. (Maybe we’re just too late for happiness.) Staggering reality.

Lotte van den Berg (1975), born in Groningen, first studied theater studies, later directing in Amsterdam. But she already felt the attraction of the scene from the time that she was a child. Not necessarily at an executive level, but organisationally and even then already innovative. Her father, Jozef van den Berg, was a famous puppeteer, until he left his family and went to a Greek Orthodox monastery as a monk, where he still lives today. But the daughter did not have enough dolls – she needed people and realities and landscapes, which she can let go of and then look at what happens. “Yes, I am a voyeur,” she laughs at the question, “I can walk for hours on end and watch people: how they treat each other or with themselves, how they talk, keep silent, touch each other. Such walks inspire me more than anything else.”

For Gerucht (2007) she puts a giant box with panorama glass on a busy square. The audience is in the box with the actors. They look outside and listen through headphones to sounds and conversation patches that they can not place. Part of the audience leaves the room and mixes among the passers-by: they are the actors who sometimes lose the ones left behind out of sight, but never out of ears. Reality begins to stagger, both in and out of ‘being and appearing’ in each other, the passers-by become part of the performance – but they do not know it. When it starts to rain, only the actors react: the square does not get wet, but sound turns into looks and looks into ‘rumor’.

But Lotte van den Berg also worked in places where reality can not be controlled: in the prison of Antwerp, for example. (Begijnenstraat 42, 2005.)

She rehearsed for two months with prisoners, won their trust and got permission from the tough guys to show their vulnerable side in the performance  It has become a piece that moved the actors, director and the audience deeply. Silence that arose a year later reflects once again the hermetic and stuffiness of that experience. Six people in a closed room, a few chairs, an old piano and 30,000 pieces of soap. Neatly closed together, like a parquet floor. A young couple, an older couple, a blind man (the eyes stuck) and a child.

The action between these people develops from a shaky balance, with a permanent danger of crashing, where hope and resignation keep each other in balance. The atmosphere is so oppressive that every miniscule gesture assumes enormous proportions. A vague look is enough, the nodding of a head, a hand or foot that slips over the slippery soap, a heavy bite of air, someone who lies cumbersome on the floor (to die?). It is almost a choreography, this sleeping piece of common sense, which does not give birth to monsters, but innocence. “The actors should not feed the spectators,” says Lotte van den Berg, “but what they do, they do for themselves. They must give me the feeling that they would do that even if there was no audience. What I am looking for is not theatricality, but authenticity.”

She has an incredible feeling for in-between tones, for abysses and high tension between people, for the cry under the rest and the power of patience. By renouncing language, everything must arise through the presence or volatility of bodies in space. Only by movement and gestation, delay and concentration, an atmosphere is created in which every detail is important, every breath counts, every truth limps. The ‘Lothy’ minimalism sharpens the senses and opens the heart. Those who look carefully and breathe with them experience a sensitization that seemed to have been lost in times of screaming theater and foolish superficial stimuli. Of course that is not suitable for everyone, nor is it necessary. It is for people who prefer to study the small announcement of a harp concert rather than the big poster for a boxing contest, as Horváth once put it, for them Van den Berg’s cosmos can be a revelation.

All performances come from improvisation sessions. Initiator Van den Berg establishes a spatial structure and gives a vague theme. Then she waits for what the performers make of it. Many directors and choreographers work there – but the special thing here is that Van den Berg’s plays almost as well as never are spoken (and if it does happen, then with words made up) and that the movement language is extremely delayed and introverted. Lotte van den Berg is neither slow nor introverted. And she does not stop at all. It is an aesthetic choice, more a cinematic view of the world than a scenic one. She prefers to go to the cinema than to the theatre. In response to the demand for artists she admires, her first film directors come to mind (Tarkovsky, Gus van Sant, Haneke), as well as the Belgian performer Benjamin Verdonck, “because he always stays with himself in his performances and never pretends to be someone else but himself.”
She knows Verdonck from her time at the Toneelhuis in Antwerp, where they were both members of the team of artistic leaders that received intendant Guy Cassiers in 2006. After two and a half years she leaves Antwerp, she has smelled blood and wants her own theatre, even if it is small. She gets that in Dordrecht, where the township wants to convert an old power plant into a huge cultural center. She plays the pioneering role there, is a luminous art spot in the middle of the construction site. Her first project, Mapping the unknown, which you could also call “city map of loneliness”, arises in 2009 in collaboration with fifty people from Dordrecht. She wants to get to know the small Dutch city and get to know her fellow residents. She calls her theatre company OMSK, “because I love that word and its sound. It is an almost Dadaist word that means nothing, but at the same time the name of a city in Siberia. We travel a lot with our theatre company, even to faraway places, but to Omsk we will probably never come.”

But in Africa: last year the director spent four months in Kinshasa (Congo). She organised a street happening and sharpened her professional voyeurism to a strange world. “What do you see when you don’t understand?” I asked myself. And can I look with strange eyes?” Fascinated by what actually bothered her, the excited crowd, she searched for the hidden spirituality. “That enormous energy, also hysteria, it exalted – I was shocked, but gradually I also understood that this community of shouting and ecstasy, as you see them there at church services, is simply a necessity of life. You need the collective to endure suffering – only you would break it. This fact has also very much touched and confused me, because for me personally the opposite is important: the silence and contemplation, the quiet breathing.”

From all these experiences a new performance arose in the spring of 2011. It is called Les spectateurs and thematises watching, in the theatre and in life. At the beginning, the four performers, two men and two women, are positioned at the greatest possible distance from each other. A wind machine blows plastic foil through the room. What you first think is the dancing garbage, then a bird, turns out to be an endless amount of cut out silhouettes. Hundreds of human contours swirl through the air, they fly, pour down, sneak, are blown up again – it is an impressive image, very aesthetic and very threatening. From the collective whirl of the plastic casings, very concentrated, individual chants of the two women follow, in a fantasy language between French and Lingala. The calm after the storm feels introvert and Dadaistic. In the third part of the play, spectators are invited on stage and offered wine and bread. All individuals form a group under the eyes of the performers. The evening is a scenic translation of Van den Berg’s Africa experience. Not necessarily understandable, but very fascinating. And the performance distinguishes itself with this careful scrutiny pleasantly of the attempts of many other European theater makers, who have “understood” Africa so well that they inevitably go wrong. Lotte van den Berg’s approach is fairer, more modest, undoubtedly more promising. Her gaze on the strange is not omniscient, but searching. “I need the distance to get closer,” she says. And that applies to all continents.