Van den Berg leads us, with gentle insistence, towards empathy

On entering the large empty space in Theater Rotterdam, we are given a folded sheet of paper.
The words on the cover say: ‘Find a place in space, alone, to read this text’. For the next three hours, loved ones and close friends will be separated. Everyone searches for a place and starts reading. Standing, sitting or lying down – whatever we find most comfortable. There are folding stools and glasses of water too, if we need them.

So begins Dying Together, the newest offering of Lotte van den Berg, which premiered last Friday in Theater Rotterdam. The language of the performance is English. Beginning with Building
Conversation (2013), her work has been in demand worldwide, she always works with participants of various nationalities and, contrary to advancing populist nationalism, her audience in the
Netherlands is increasingly diverse.

Van den Berg also searches for a ‘space’, somewhere among us, as do the members of her
international team. Together they wait patiently until we have finished reading. The text starts with three examples that escalate in their meaning for what Van den Berg wants to do with us tonight. I read that In Greece, a group of people fled a forest fire, but halted when they reached the edge of a ravine and were overtaken by fire. Later, rescuers discovered their bodies. Burned alive, entwined in an intimate embrace. “This is called togetherness.”

In the midst of a dense crowd, a man detonates his bomb vest. The explosion causes fragments of his own body to penetrate the bodies of the people around him. “This too is a form of togetherness.” Another man and his three children perish during a climb in the mountains. The mother is left alone. “She died together with them, but is still alive.”

Powerful stuff. And that is only the preparation. The text concludes by asking: ” Can looking at the way we die together give us new perspectives on the way we live together?” That’s Van den Berg to a T. She will never impose anything on us. Her goal is always to explore something with us, and see what we arrive at together. The only instruction she provides is a game with rules that she devised, again in collaboration. ‘We have developed a practice’, she says when we have finished reading, ‘and we want to share that with you.’

She asks us to represent those who were involved in three cases of joint death. Three, because she considers that the minimum we need to get a grasp of the process, her practice. During the first case we familiarise ourselves with the circumstances, in the second we apply our knowledge, and by the third we begin to follow a kind of routine. The first case is the Germanwings crash in 2015 in the French Alps. The co-pilot committed suicide by deliberately crashing into a mountain, killing 149 people on board.

Someone from the team reads details, about the several people who were involved in the disaster
from the cards provided. Another member approaches one of us and reads the text again. ‘Do you
want to represent this person?’. If we say ‘yes’, she positions us in another place in the space. ‘This is where you begin’. We can decide how long we stay there, and the pose that we assume. This creates what Van den Berg calls a constellation. Gradually the representatives fill the space with an organically-evolving ‘galaxy’; a different one for every case, in every performance. Once that process is complete, she asks us to imagine four moments: shortly before the disaster, during the impact, a month after the event, and a hundred years later, when all those involved have died and their bodies and physical debris are unrecognisable, scattered in billions of particles across the planet.

Van den Berg takes a supremely democratic approach: the structure of Dying Together testifies to her sophistication and skills as a maker. In the plane crash, the consequences were confined to the passengers and their relatives. Well, not entirely. Animals, plants and stones also died on the mountain, she’s quick to point out. Even the plane is a victim: one of us represents the cockpit door that the co-pilot had locked.

The repercussions of the second case are far more widespread. In 2013, a boat filled with refugees sank in the Mediterranean, near the Italian island of Lampedusa, the unwitting gateway to Europe. Three hundred and sixty people died, 155 survived. During our representations and meditations on the four moments, we begin to grasp the staggering ramifications. From those left behind in African villages – every single villager, not simply the immigrants’ relatives. To Europe’s moral bankruptcy, where everyone is purportedly equal in the eyes of the law and everyone has a right to peaceful coexistence. Everyone. With the exception of impoverished North Africans.

The third case goes further still. The Paris attacks of 2015 not only cost 130 people their lives. They also led to a spate of bombings on Syria carried out by an international coalition of the richest and most powerful Western nations, led as always by the United States. The bombings were said to be in retaliation against the Islamic State, which claimed the attacks. Yet they cost countless innocent Syrians their lives.

I represent a man who serves in the Syrian Air Force. I feel excluded. Misunderstood. The
international mass media wage a holy war against IS because of the victims in Paris. Hey! Can I get a word in? Yes – that war rages in my country, a long way from France! It is my family, friends and neighbours who’ve been suffering for years! Under their own, extremely brutal government, under IS and the ‘freer’ Islamic rebels fighting each other on my territory, and among the Western, Turkish and Russian superpowers who’ve become embroiled in the conflict for their own reasons.

What do the others in the space actually know about me? I may be a Syrian soldier – and in their eyes, probably an accomplice of the devil Assad. But perhaps I had no other choice but to join the army – if I hadn’t, my neighbours would have been tortured, imprisoned or even killed. And may I at least be allowed to defend my own country, my own home, my own people against the havoc that has gripped Syria?

Van den Berg asks us to represent. Not to play our characters. We must also represent everyone
involved. Offenders and victims. And that’s tough. The fifteen-year-old girl, who had told her parents that she was looking forward to seeing them again, just before the Germanwings flight took off – we all want to represent her. But one of us refuses to do that for the co-pilot.

And that’s allowed. The rules of Dying Together leave us a great deal of freedom. During the followup discussion, it’s clear that most of us strongly identified with our characters. But not all of them. My companion, a Palestinian friend from East Jerusalem who knows all about dying together, represents one of the shooters in Paris, an ordinary bus driver, husband and father. “He did not kill out of his own free will,” he tells us. “The real perpetrators are those who indoctrinated him, who poisoned his brain.”

With her assignment to represent ‘neutrally’, Van den Berg leads us, with gentle insistence, to a space where we can empathise without making an immediate judgement. Whether or not we accept this assignment. Because she also encourages those who refuse, to consider their motives: what is it about that perpetrator that I’m so opposed to?

As a Syrian Air Force man, I start walking through the space, looking for some kind of connection. Suddenly, I face a man who stares at me intently. I stare back, until he averts his eyes and walks away. It feels like a small victory. Especially for the Syrian who, for a brief moment, I represent. And for myself, too. Because Dying Together brings a group of strangers, random theatre visitors, closer to the abstract dead and perpetrators that make international headlines.

And, thanks to that, to each other. 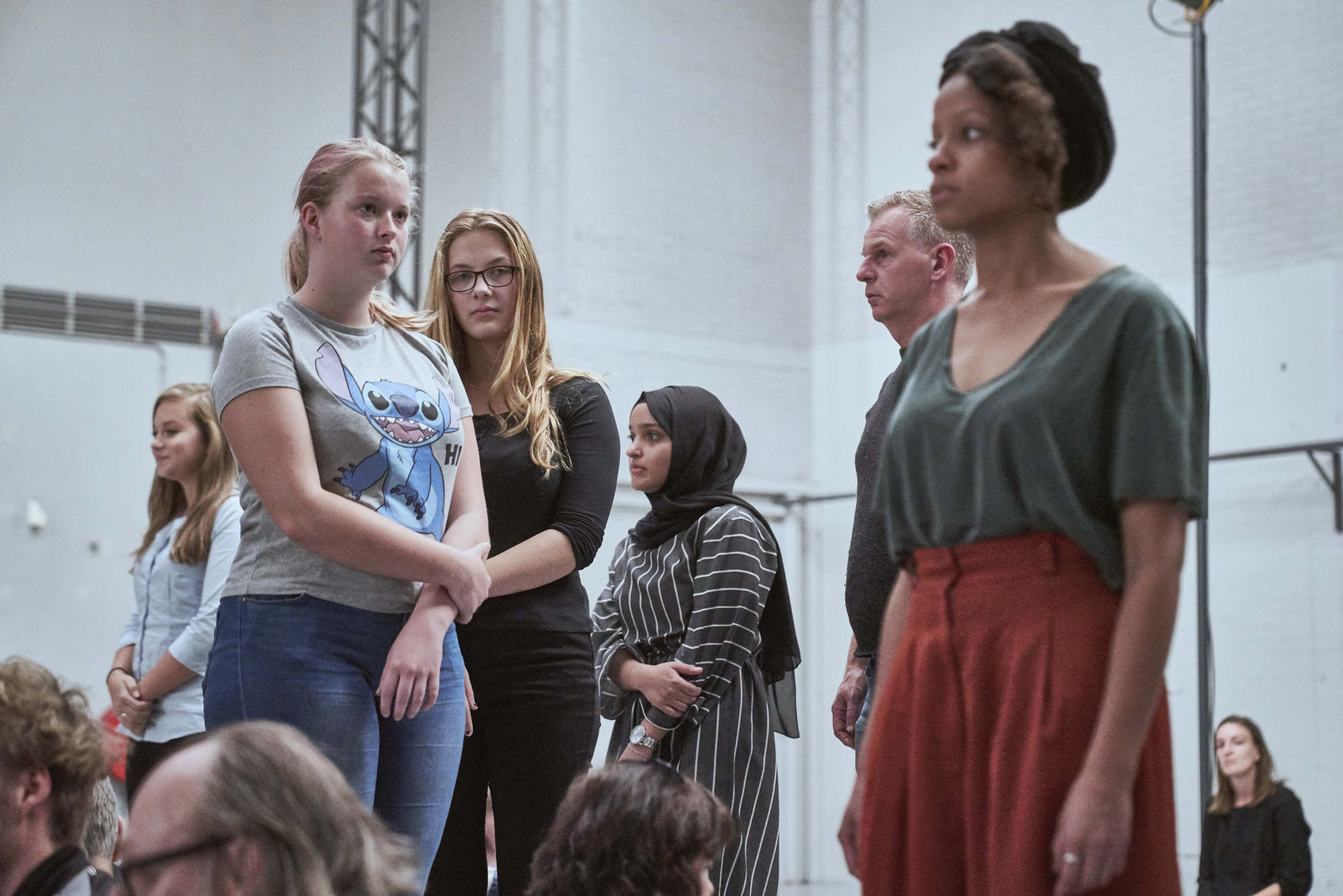